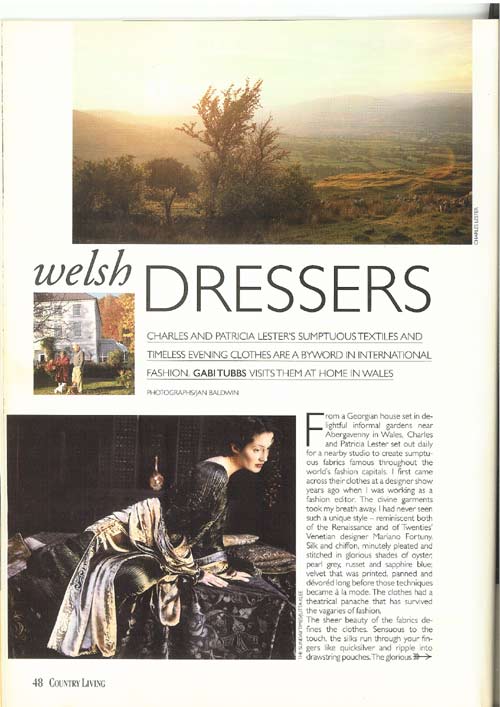 Photograph of the Welsh countryside by Charles Lester.

From a Georgian house set in a delightful informal gardens near Abergavenny in Wales, Charles and Patricia Lester set out daily for a nearby studio to create sumptuous fabrics famous throughout the world’s fashion capitals. I first came across their clothes at a designer show years ago when I was working as a fashion editor. The divine garments took my breath away. I had never seen such a unique style – reminiscent bother of the Renaissance and of Twenties Venetian designer Mariano Fortuny. Silk and chiffon, minutely pleated and stitched in glorious shades of oyster, pearly grey, russet and sapphire blue; velvet that was printed, panned and devored long before those techniques became a la mode. The clothes had a theatrical panache that has survived the vagaries of fashion.

The sheer beauty of the fabrics defines the clothes. Sensuous to the touch, the silks run through your fingers like quicksilver and ripple into drawstring pouches. The glorious ——- 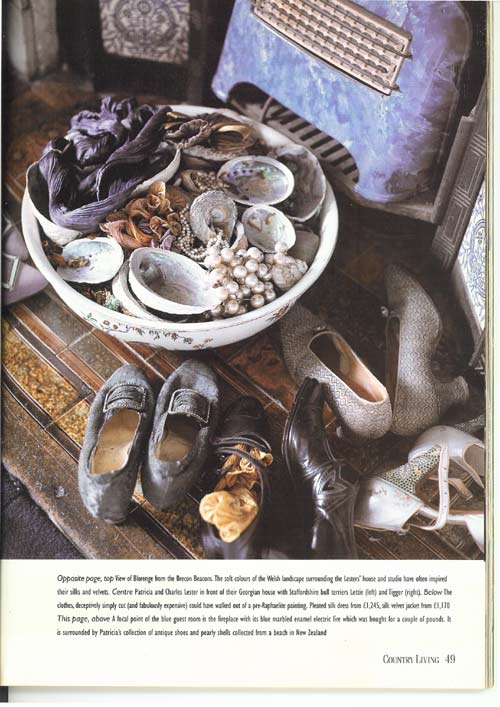 Opposite page, top view of Blorenge from the Brecon Beacons. The soft colours of the Welsh landscape surrounding the Lesters’ home and studio have often inspired their silks and velvets. Centre Patricia and Charles Lester in front of their Georgian house with Staffordshire bull terriers Lettie (left) and Tigger (right). Below The clothes deceptively simply cut (and fabulously expensive) could have walked out of a pre-Raphaelite painting. Pleated silk dress from £1245, silk velvet jacket from £1170.

This page, above A focal point of the blue guest room is the fireplace with its blue marbled enamel electric fire which was bought for a couple of pounds. It is surrounded by Patricia’s collection of antique shoes and pearly shells collected from a beach in New Zealand. 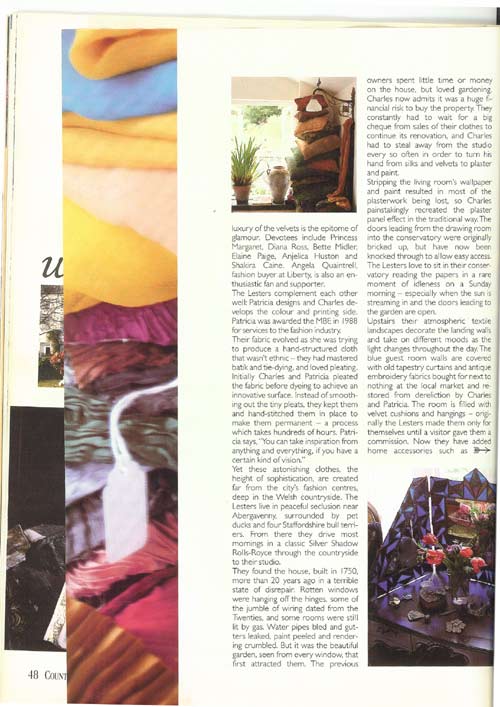 The Lesters complement each other well: Patricia designs and Charles develops the colour and printing side. Patricia was awarded the MBE in 1988 for services to the fashion industry.

Their fabric evolved as she was trying to produce a hand-structured cloth that wasn’t ethnic — they had mastered batik and tie-dying, and loved pleating. Initially Charles and Patricia pleated the fabric before dying to achieve an innovative surface. Instead of smoothing out the tiny pleats, they kept them and hand-stitched them in place to make them permanent — a process which takes hundreds of hours. Patricia says, “You can take inspiration from anything and everything, if you have a certain kind of vision.”

Yet these astonishing clothes, the height of sophistication, are created far from the city’s fashion centers, deep in the Welsh countryside. The Lesters live in peaceful seclusion near Abergavenny, surrounded by pet ducks and four Staffordshire bull terriers. From there they drive most mornings in a classic Silver Shadow Rolls-Royce through the countryside to their studio.

They found the house, built in 1750, more than 20 years ago in a terrible state of disrepair. Rotten windows were hanging off the hinges, some of the jumble of wiring dated from the Twenties, and some rooms were still lit by gas. Water pipes bled and gutters leaked, paint peeled and rendering crumbled. But it was the beautiful garden, seen from every window, that first attracted them. The previous owners spent little time or money on the house, but loved gardening. Charles now admits it was a huge financial risk to buy the property They constantly had to wait for a big cheque from sales of their clothes to continue its renovation, and Charles had to steal away from the studio every so often in order to turn his hand from silks and velvets to plaster and paint.

Stripping the living room’s wallpaper and paint resulted in most of the plasterwork being lost, so Charles painstakingly recreated the plaster panel effect in the traditional way. The doors leading from the drawing room into the conservatory were originally bricked up, but have now been knocked through to allow easy access. The Lesters love to sit in their conservatory reading the papers in a rare moment of idleness on a Sunday morning — especially when the sun is streaming in and the doors leading to the garden are open.

Upstairs their atmospheric textile landscapes decorate the landing walls and take on different moods as the light changes throughout the day The blue guest room walls are covered with old tapestry curtains and antique embroidery fabrics bought for next to nothing at the local market and restored from dereliction by Charles and Patricia, The room is filled with velvet cushions and hangings — originally the Lesters made them only for themselves until a visitor gave them a commission. Now they have added home accessories such as cushions, wallhangings, throws and screens to their collection. The bathroom with its spectacular view is almost totally taken up by an enormous bath which doubles as a jacuzzi — a luxury they have never regretted.

The peaceful kitchen, with its Welsh dresser crammed full of old china, new ceramics and paintings by granddaughter Anouska, is the hub of the house. Squeezed orange halves dried on top of a woodburning stove scent the air. The brass trinkets on the rustic beams, the dogs and the ducks, all seem worlds away from the glamour of international fashion where the Lesters’ work is so much admired. 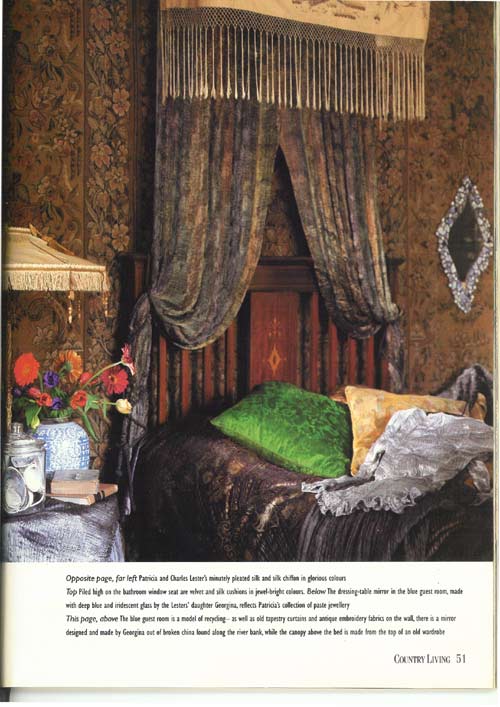 Top Piled high on the bathroom window seat are velvet and silk cushions in jewel-bright colours. Below The dressing table mirror in the blue guest room, made with deep blue and iridescent glass by the Lesters’ daughter Georgina, reflects Patricia’s collection of paste jewellery.

This page, above The blue guest room is a model of reclycling – as well as old tapestry curtains and antique embroidery fabrics on the wall, there is a mirror designed and made by Georgina out of broken china found along the river bank, which the canopy above the bed is made from the top of an old wardrobe. 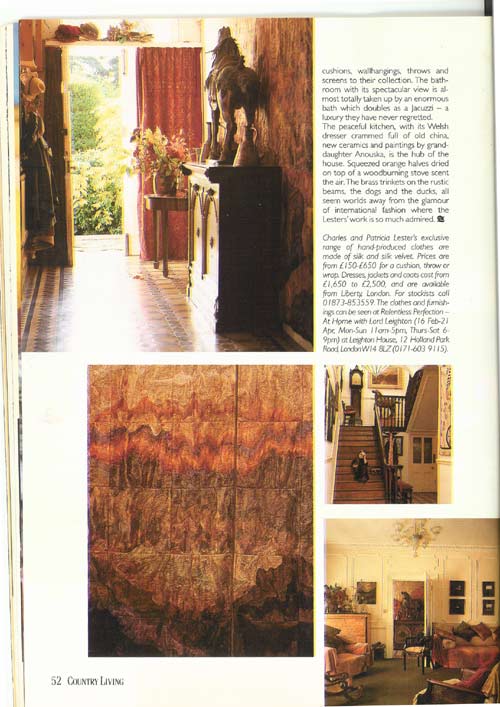 Opposite page, top left A wooden horse, one of two brought back from China by the Lesters’ daughter Georgina, dominates the hallway

Below left Patricia’s wallhanging “Wales” was inspired by the lines and colours of the surrounding countryside.

Top right Patricia and Charles’s five-year-old granddaughter Anouska models a scaled-down version of a dress designed by her grandparents.

Below right A glass chandelier, bought on a trip to Venice, hangs from the ceiling of the panelled drawing room. The Lesters bought two from a factory that also supplies them with glass beads for their clothes

This page, above The Biedermeier bureau in the living room is topped by a fake crystal head-dress designed for a fashion show and a twig sculpture made by Georgina 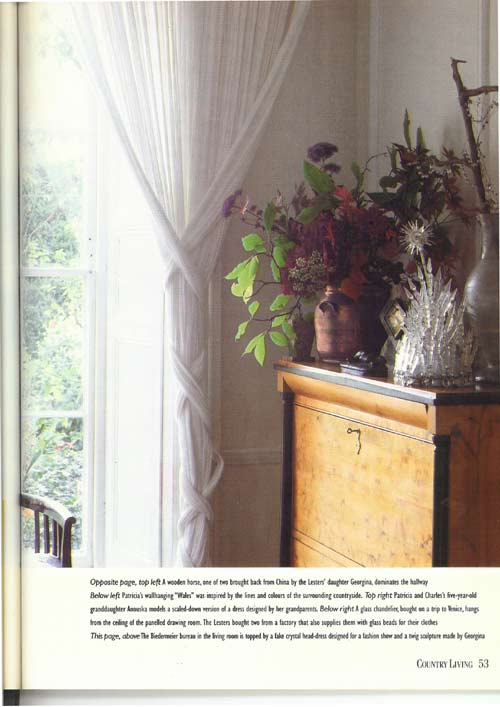 Opposite pag, top left A wooden horse, one of two brought back from China by the Lesters’ daughter Georgina, dominates the hallway.

Below left Patricia’s wallhanging “Wales” was inspried by the lines and colours of the surrounding countryside. Below right A glass chandelier, bought on a trip to Venice, hangs from the ceiling of the panelled drawing room. The Lesters bought two from a factory that also supplies them with glass beads for their clothes.

This page, above The Biedermeier bureau in the living room is topped by a fake crystal head-dress designed for a fashion show and a twig sculpture made by Georgina.